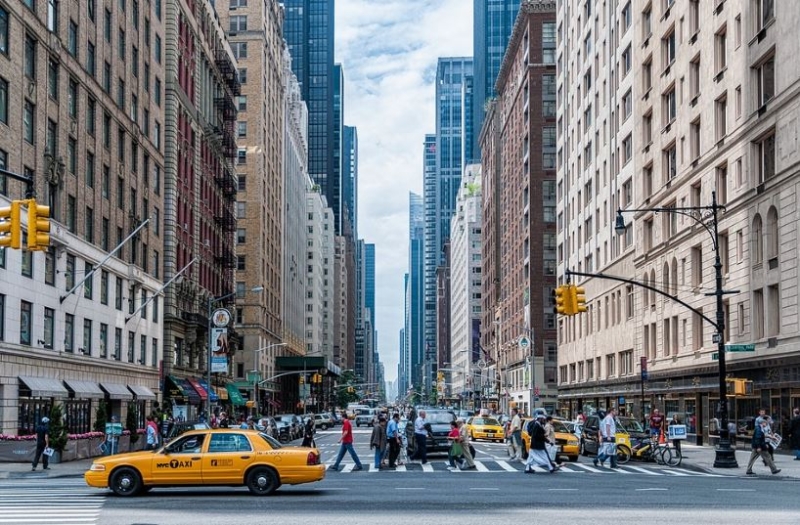 On a recent Sunday afternoon, Austin Garza, a tourist from Dallas, stopped by the flagship store of Weed World Candies in Midtown Manhattan and bought two pre-rolled joints.

Outside, he opened a yellow tube labeled Super Silver Haze. He took out a joint to smoke and offered puffs to passers-by, three of whom obliged.

The store opened in 2019 and had been an outlier among the pizza parlors, novelty shops and officer towers on 7th Avenue between Times Square and Penn Station. But in recent months, several more smoke shops and dispensaries have sprung up on the same strip, illegally selling cannabis products to tourists, city dwellers and commuters.

The sleek dispensaries and tacky bodegas are part of an explosion of unlicensed cannabis shops that have opened in New York over the past year as part of a rush to cash in on the state’s legalization of cannabis before the rules could be set.

Now on the eve of the launch of the state’s legal market, the authorities face growing pressure to address the shops, which have created confusion among everyone from tourists to police officers.

State regulators and some industry insiders have called for the shops to be shut down for fear they undermine the legal market. But supporters of the shops say they are employing people and serving a clientele left waiting for legal retail locations that have been slow to launch. New York legalized cannabis for adult recreational use last year in March.

In the city, the Adams administration has been reluctant to treat the illegal shops with a heavy hand. Kayla Mamelak, a spokeswoman for the mayor, said the city sheriff’s office, a small civil law enforcement agency, has conducted hundreds of business inspections, during which deputies confiscated illegal products, issued fines and made arrests. “Mayor Adams has been clear that no illegal business operations should be tolerated,” she said.

City authorities have sought to avoid stirring memories of the war on drugs with widespread arrests, said Jeffrey Hoffman, a cannabis lawyer and legalization activist.

“We’ve hit the reset button,” Mr. Hoffman said. “The issue just became how long they were going to let it go.”

State cannabis regulators issued the first retail licenses on Monday, allowing 36 businesses and nonprofits to open dispensaries serving adults 21 and older. State officials have said they hope to have the first retail sales underway by the end of the year.

Without a significant change in the landscape, they will be forced into competition with unlicensed sellers who already have a foothold in the market and can offer lower prices because they do not pay cannabis sales taxes or comply with state regulations.

Since legalization, cannabis shops have surfaced nearly everywhere: two blocks from a police precinct station house in Long Island City, across an intersection from a middle school in Harlem and on top of a subway station in Williamsburg, for example.

Regulators said they were tracking the shops across the state, but refused to estimate how many exist. Industry observers say they appear to number in the hundreds.

“Everybody’s doing what they got to do to get in the market,” Mel Rivera explained from behind the counter at Smoker’s World, which opened in February in Midtown, and sells cannabis edibles and joints, among tobacco and hookahs.

At Weed World, a large acrylic sign advertises strains of indicas and sativas whose quirky names are written in neon colors, along with the letters “THC,” shorthand for tetrahydrocannabinol, the intoxicating compound in cannabis.

However, the owner, Bilal Muhammad, maintains that his business, unlike some newcomers, has only ever sold products made with cannabidiol, or CBD, which comes from the same plant as THC but does not get consumers high, he said.

Yet, CBD and THC both require separate licenses to sell, and Weed World had neither, Mr. Muhammad said. But he criticized the authorities for lumping his company in with sellers hawking potent THC products.

Over the summer, the city seized more than a dozen of his colorfully distinctive trucks. But most of the vehicles were returned after he made arrangements to pay down $670,000 in fines for parking and health code violations, according to Mr. Muhammad. The trucks are in storage in New Jersey, he said.

Smoke shops are not the only places that have popped up selling cannabis. State regulators have also cited a tattoo parlor, an opera house and a beauty salon.

But the smoke shops are particularly concerning, regulators have said, because they give consumers the impression that they are legitimate when in reality they are operating without official oversight.

New York requires all weed sold in the state to have been grown, processed and tested within its borders, a supply chain known as seed-to-sale. But most weed shops in the city sell products in packaging with a California stamp, and some also offer illegal drugs as well as candies and elixirs made with psychedelic mushrooms.

State Senator Brad Hoylman, a Manhattan Democrat, wrote a letter to Mayor Eric Adams in September expressing concern after more than two dozen unlicensed shops opened on the west side of his district.

“I can’t tell my constituents that these products are safe, or they’re not being sold to minors, or that the strength of the cannabis — for example, when it comes to gummies — is as advertised,” Mr. Hoylman said in an interview.

On top of that, he added, the shops undermine lawmakers’ intention to prioritize people convicted of marijuana offenses for opportunities in the cannabis industry. The illegal shops also skirt taxes that are meant to fund addiction services, education and reinvestment in communities where enforcement was concentrated.

Violence is another concern. The shops, which often keep large amounts of cash on hand, have been targets of robberies and burglaries, which have sometimes escalated to shootings and stabbings.

Julia Deviatkina closed Freaky Dog, a smoking lounge in Brooklyn, after the state published her name and address in a cease-and-desist letter.

With all of the problems surrounding unregulated cannabis, regulators and some lawmakers have pushed for weed shops to be shut down. But Paula Collins, a lawyer who represents smoke shop and convenience store owners who sell cannabis, said that would be a mistake.

Closing stores would mean layoffs for thousands of workers, many of whom are people of color, she said. And it would unfairly punish owners who have helped to normalize cannabis and buoy the state’s struggling commercial real estate market, she added.

Instead of cracking down on the shops, Ms. Collins said the state should try legitimizing them.

“We have all these shops popping up, everybody’s concerned, and at the same time, we’re missing out on all of this good tax revenue,” she said.

State lawmakers have said they aim to absorb the illegal market into the regulated industry. But regulators have bluntly and repeatedly warned that all unlicensed cannabis sales are illegal, no matter if the cannabis product is gifted following a “donation,” or if the exchange is couched with the purchase of a membership or service.

But some businesses shrugged off the warnings, citing what they perceive as gray areas in the law and a lack of enforcement.

The Empire Cannabis Club, a nonprofit based in New York City and co-owned by a family whose father and a son have served time in prison for marijuana offenses, describes itself as a concierge service that acquires cannabis on behalf of its members, who pay a monthly fee.

Steve Zissou, Empire's lawyer, said the business model is based on provisions in the legalization law that he interprets as permitting social clubs.

“It’s a legitimate outfit set up under the law as it exists,” Mr. Zissou said. “Don’t you think if they could shut it down, that they would’ve already?”

The city has said a lack of legal clarity has prevented it from going after shops selling weed and called for amendments to the cannabis law.

Mayor Adams, asked about stores at an unrelated news conference last month, said the city’s hands were tied because the law had not caught up to reality. “A police officer can’t just walk in and conduct an apprehension, or an arrest, or confiscate the item,” he added. “There’s a process.”

The Police Department explained in an email to The Times that, in its view, the legalization law does not give officers the authority to make seizures or arrests when they see cannabis displayed for sale or to shut down unlicensed shops.

“The law only provides an enforcement mechanism if an actual sale is observed,” its public-information office said.

Chris Alexander, the executive director of the Office of Cannabis Management, said that is a common misapprehension among local law enforcement that has surprised him with its endurance.

State law makes it a crime to possess more than three ounces of cannabis or to sell any amount of it. Punishments range from $125 fines to 15-year prison sentences. And some of the same municipal regulations that allowed the city to go after trucks, such as those governing the sale of food, smoking products and worker protections, can be used against storefronts, Mr. Alexander said.

“I think that education has taken more time than I thought it would,” he said, acknowledging that the authorities needed time to adjust to such a major policy shift.

“For an average beat cop who knows that we legalized, he sees stuff happening and he’s like, ‘Well, I don’t know if that’s regulated or not but I know they legalized, so I think that there is less of a role for me,’” Mr. Alexander said. “What we are constantly communicating is ‘no, you still have to help us protect this thing that we’re building’.”

The winds may be changing. Police and sheriff’s deputies conducted raids earlier this month at a cannabis dispensary in Bay Ridge and a smoke shop in Greenwich Village. Investigators arrested one man on felony cannabis possession charges, seized over 200 pounds of illegal tobacco and weed, and levied $8,000 in fines, Sheriff Anthony Miranda’s office said.

“This is a danger to the community,” he told Loud Labs NYC, a local news outfit. He added, “nobody really wants that in their neighborhood.”

But Lance Lazzaro, a criminal defense lawyer, said that his experience handling three similar cases made him confident the charges would be dismissed in court.