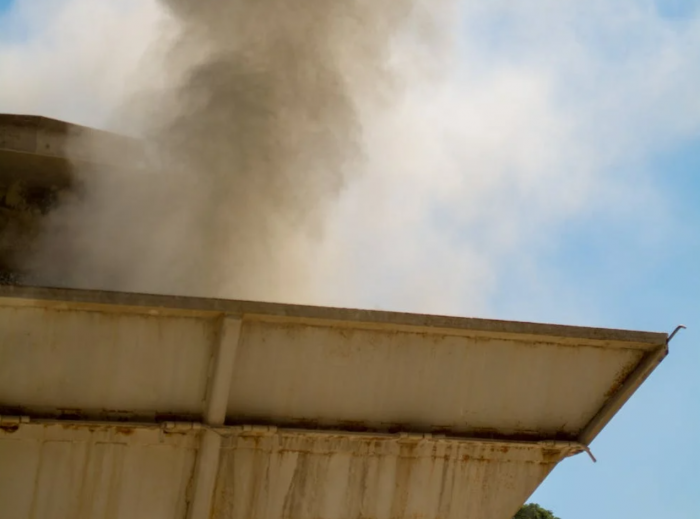 HOLYOKE - Federal regulators are alleging that a cannabis worker died early this year from inhaling ground-marijuana dust at an indoor grow operation in Holyoke.

In a summary of its investigation, the Occupational Safety and Health Administration said that on Jan. 7 an employee of the cannabis giant Trulieve was grinding cannabis and packaging it into pre-rolled joints when she complained that she couldn’t breath. Ultimately, OSHA investigators said she was killed “due to the hazards of ground cannabis dust.” Few other details are contained in OSHA’s report.

In June, the agency issued Trulieve three fines totaling $35,219 for alleged violations related to the death. Trulieve has contested those violations, according to OSHA records. Rob Kremer, the company’s executive director of corporate communications, did not return multiple phone and email messages left Saturday.

A Florida-based company with operations in eight states, Trulieve is permitted to grow up to 80,000 square feet of cannabis plants at its Holyoke cultivation and production facility in the former Conklin Office Furniture mill building at 56 Canal St. and 7 North Bridge St.. It also operates three retail stores in Massachusetts, including one at 216 North King St. in Northampton.

OSHA alleges that on Jan. 7 at 11 p.m., the worker began having a medical crisis.

“Filling pre-rolls she said she couldn’t breathe,” OSHA’s investigation says. The investigation attributes her death to the dangers of inhaling marijuana “kief,” as cannabis dust is sometimes known.

The three penalties that OSHA has levied against Trulieve are categorized as “serious.” OSHA has alleged that Trulieve violated federal regulations requiring that companies maintain a written hazard communication plan, keep safety data sheets on hazardous chemicals, and provide information and training on those chemicals.

Efforts to reach the family of the woman who died were unsuccessful this weekend. She is unnamed in the OSHA investigation. Her death was first reported by The Young Jurks podcast.

City officials in Holyoke have bet big on the marijuana industry, working to attract cannabis businesses to the Paper City’s many vacant industrial properties. In particular, marijuana cultivators have been drawn to the city by its available property and cheap electricity — the largest costs for indoor growers. As one of the country’s first planned industrial cities, Holyoke can provide incredibly low electric rates because of its dam and municipal canal system.

In total, the state’s Cannabis Control Commission has granted 72 licenses to retail, cultivation and manufacturing businesses operating in Holyoke, according to CCC data. That’s almost double the 37 cannabis licenses granted in Boston, the city with the second-highest number of licenses. Worcester, the third-highest, has 33 licenses granted.

Trulieve — a publicly traded company and major player in the cannabis industry — was one of the first cultivators to arrive in Holyoke. Reached via text Sunday afternoon, Holyoke Mayor Joshua Garcia said it was the first time he had heard about the death at Trulieve’s facility. As such, he said he didn’t have enough information to comment on the incident.

“This is news to me and I’m very shocked to hear this,” he wrote.

The OSHA penalties against Trulieve in Holyoke are not the first that the agency has issued against the company over alleged regulatory violations at its grow facilities.

In March, Trulieve settled an OSHA case in Reading, Pennsylvania, where it was cited for violating a regulation requiring companies to report an employee’s in-patient hospitalization, amputation or loss of an eye.

In 2019, OSHA cited the company for violating respiratory protection and hazard communication regulations at its grow facility in Quincy, Florida.

Respiratory hazards have also been discovered at other cannabis cultivation facilities in Massachusetts. Early in 2021, for example, the Monson cultivation facility owned by multi-state operator Holistic Industries experienced a widespread infestation of mold, according to leaked documents.

Trulieve’s Holyoke facility is not unionized. Some cannabis workers at other facilities in the region, however, have unionized, including employees of another Holyoke cultivation site run by the company Green Thumb Industries.

Drew Weisse is an organizer at United Food and Commercial Workers Local 1459, which represents those workers. Speaking about the cannabis industry in general, he said cultivation workers often face workplace dangers.

“You’re doing farm work in a factory, so you have the health hazards associated with both farm and factory settings,” he said.

Weisse said that cultivation workers typically earn low wages, with some earning minimum wage. Weisse added that unionized workers can push for better safety standards and pay, and that unlike other industries, agricultural workers in Massachusetts can form a union simply by getting a majority of coworkers to sign union cards.