This Hemp Dealer is fighting The State over ‘Fundamental Fairness’ 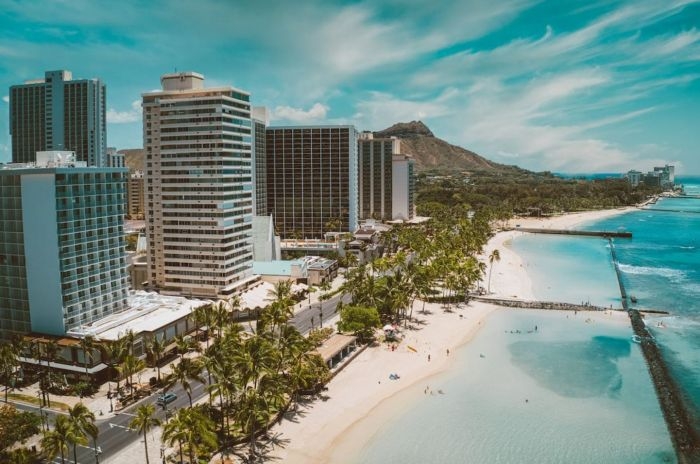 The case raises questions about the extent to which government officials can make new laws with little public notice, then shut down businesses not in compliance.

October, Mark White came to Hawaii with the dream of setting up a business under a new state law allowing people to sell products derived from hemp, such as cannabis oil.

Nine months later, the rules on hemp were changed, White’s business, Pinky’s Hempire, was shut down by state officials, and his inventory was seized by state health officials and turned over to police.

“It crushed me,” White said of the June 24 raid by Department of Health officials. “It crushed me and my family.”

Previously shut down and its inventory seized by authorities, Pinky’s Hempire has reopened a kiosk at Duke’s Lane in Waikiki. Cory Lum/Civil Beat/2022

Now White is fighting back. In a federal suit filed earlier this month against the Hawaii Department of Health and its director, Elizabeth Char, White alleges the state violated Hawaii law by passing administrative rules – ones that made his business suddenly illegal — without following Hawaii law.

While the dispute between Pinky’s Hempire and the state might seem like just another struggle between a small business and government regulators, the matter involves bigger questions, including the extent to which government officials can make new laws with little public notice, then use the laws to shut down unwitting businesses.

Also at issue is whether, when the government does make new laws, it can shut down previously legal businesses without compensating the business owners.

The Rise And Fall Of Pinky’s Hempire

The chronology of events is brief. In 2020, the Hawaii Legislature passed a bill to legalize hemp. The measure noted the U.S. Congress had done so in 2018 and said “in light of these federal reforms, state laws regarding hemp should also be reformed.”

The bill also outlined the sorts of things the Hawaii Department of Health would establish by administrative rule, including testing protocols, reporting requirements and penalties for violations.

Administrative rules are measures, carrying the force of law, created by executive departments instead of the Legislature. When departments adopt rules, the departments normally must give the public notice of rule changes and the opportunity to participate in public hearings. Rules adopted without public notice and hearings are generally invalid.

In this case, the Legislature carved out an exception to the normal hearing and notice requirements. It said the Department of Health could “adopt and amend interim rules” without normal rule-making as long as it had not established rules made by standard rule-making. No notice and hearing were necessary.

In August 2021, the department promulgated extensive rules. Two months later, White opened the first of a chain of stores in Honolulu. He was careful, he says, to sell hemp-based products using only the sorts of ingredients allowed by the rules.

Like marijuana, hemp contains a substance called tetrahydrocannabinol, or THC, but in much smaller concentrations than weed. Initially, Hawaii followed federal law in allowing some THC but banning another type. White says he set up his business selling only the types that were allowed, derived from hemp.

In February the Department of Health started tweaking the rules without hearing or notice, DiPasquale says. The department made more rule changes in April, he said. Suddenly, unbeknownst to White, his operation was no longer in compliance.

Steven Levinson, a retired Hawaii Supreme Court justice, read the complaint and said it raises serious questions about the duty of executive agencies to notify the public when the agencies make administrative rules. Cory Lum/Civil Beat

Steven Levinson, a former Hawaii Supreme Court justice, said a key question is whether the first hemp rules, adopted in August 2021, were passed under standard rule-making procedures. Levinson noted that nowhere are those rules identified as interim. If they were standard rules, the department could not replace standard rules with interim ones made without a public notice or hearing, he said.

“There must be more to it than this, or he has a slam dunk,” Levinson said of DiPasquale.

DiPasqale said there is more. Even if the rules were adopted properly, there’s another basic question: whether the government can shut down businesses that are operating legally by a regulatory change that suddenly makes the businesses illegal.

The Fifth Amendment of the U.S. Constitution says no person can be “deprived of life, liberty, or property, without due process of law; nor shall private property be taken for public use, without just compensation.”

Under the Constitution shutting down a business by changing the law is generally considered a form of taking that requires compensation, DiPasquale said.

On top of that, when the Department of Health raided White’s businesses, the department seized his inventory for forfeiture and turned it over to police, DiPasquale said. There was no hearing or even a charge issued, he said.

Will Baude, a professor of law and director of the Constitutional Law Institute at the University of Chicago School of Law, said asset forfeiture laws often strike people as unfair, but there is a good reason for them.

They were first established hundreds of years ago in response to activities like smuggling contraband on ships. If caught, the smugglers often would abandon the ships and illegal goods, and authorities needed a way to bring a case against the illegal goods.

The idea, he said, was to be able to seize the goods and take them out of circulation even if authorities had nobody to arrest.

Baude agreed that it seemed unfair that White could have all of his merchandise taken without even being charged with anything, but he said, “I’m not sure it would be more fair if you also charged the store owner.”

For his part, White insists he has sold only products allowed by federal law and, for a while at least, by Hawaii. He knows none of his products would “test hot” for impermissible THC, White said.

“I’m a hemp dealer and hemp’s been good to me,” he said. “I don’t need to sell anything else.”