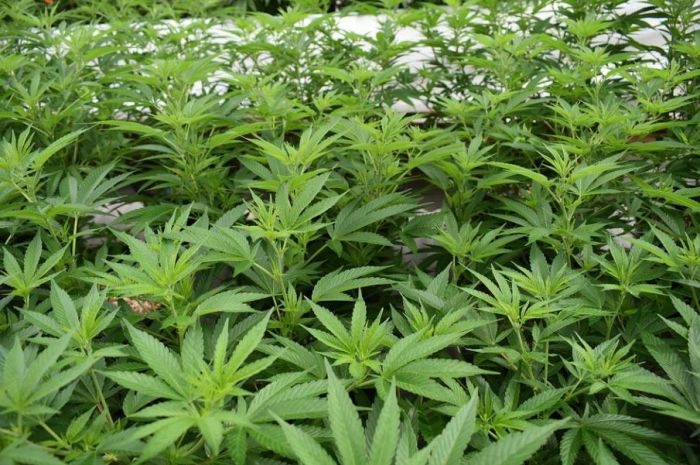 Charges are reportedly pending for suspects after a multi-force team busted an illegal cannabis grow-op in Oregon that covered almost six acres of land.

The Jackson County Sheriff’s Office (JCSO) reports that detectives with the Illegal Marijuana Enforcement Team executed a search warrant on Aug. 9 at the unlicensed grow near Medford, Ore.

On the property, the authorities discovered approximately 16,827 illegal cannabis plants inside 87 hoop-style greenhouses.

Though one subject found on site was detained and interviewed, that person was later released. “Detectives identified the primary suspects and charges are pending from the Jackson County District Attorney’s Office,” the JCSO reports.

The massive grow-op — greenhouses covered an estimated 5.5 acres of property — was identified following a nine-month investigation. “There was no licensing for any type of cannabis growing, handling or processing at this location,” the police statement notes.

Oregon Water Resources Department District 13 Watermasters, for its part, identified water violations on the property and estimated that the grow “illegally consumed roughly 25,000 gallons (113,652 litres) of water per day” or more than 1 million gallons (4,546,090 litres) over the past 40 days.

“This amount of water would fill 50 average-sized swimming pools,” the JCSO statement notes, pointing out that the estimate is conservative.

The appropriation of groundwater for irrigation and storage at an illegal commercial operation sparked a Notice of Violation being issued to the responsible parties, the statement notes, adding these breaches “are subject to both civil and criminal penalties.”

An investigation into the grow is continuing. Both medicinal and recreational cannabis is legal in Oregon.

For personal use, four plants per resident can be cultivated without penalty, according to Oregon Criminal Defense Lawyers. That said, growing five to eight plants can result in a misdemeanour charge punishable by six months in jail and a $3,125 fine while cultivating more than nine plants is a felony carrying a maximum penalty of five years in prison and fines of up to $160,000.

As for commercial size grows, these must be licensed. The producer licence gives an entity the ability to grow and cultivate cannabis, which can then be sold to a retailer or a processor, per Gleam Law.