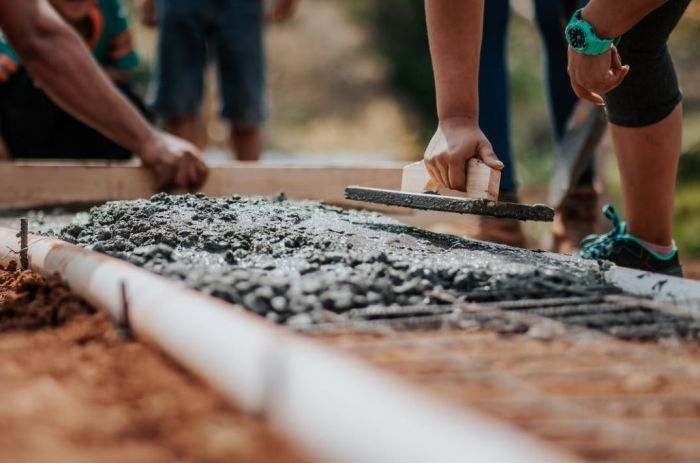 The two small houses are going up on the back half of a lot just off a busy street, not far from downtown Fargo.

"These homes are identical in blueprint, they're 13 by 23, with 12 foot ceilings, there's a loft in each of them," explains Grassroots Development president Justin Berg, the man behind this one-of-a-kind construction and research project.

One of the houses is built with a traditional wood frame, fiberglass insulation and covered with that shiny white house wrap material. Walls are build using hemp hurd, or the inner woody part of the hemp plant mixed with lime and water, then sealed with plaster. A second house a few feet away also has a wood frame but the walls are filled with 12 inches of hempcrete, giving it a brown, textured look inside and out.

The raw material is called hurd. It’s the inner woody core of the hemp plant, chipped into small pieces. The hurd is mixed with a lime binder and water. "And you blend the mixture to a consistency, a nice sort of chicken salad — is our joke —consistency,” said Grassroots Development sustainability consultant Sydney Glup. “And we hand packed, physically hand packed, this entire house."

They were guided through the process by Bismarck, ND based Homeland Hempcrete, but the process was easy to learn said Glup, just a lot of work schlepping buckets of the material, dumping it into forms and packing it so the walls would be even after the forms were removed. The hempcrete walls need to cure for six weeks before they are covered inside and out with a finish layer of plaster.

These homes might become short term rentals, but the primary purpose is research. "We're just trying to get that concrete nonbiased research to contribute to the industry so we can troubleshoot and figure out how to do better,” said Glup. “We want it to be so that anybody who wants a healthier dwelling can afford it."

To collect data, sensors are tucked into the walls of both houses to monitor moisture and air temperature. Energy consumption will also be closely monitored.

"This from my knowledge, is the only study of its kind," said Riley Gordon, principal engineer with the Minnesota based Agricultural Utilization Research Institute, a non-profit organization partially funded by the state, which helps develop new markets for Minnesota crops.

"We're just looking to bring to leverage the opportunity of having these two buildings built side by side,” said Gordon. “They're identical, it's perfect for a controlled study." Gordon is working with a Minneapolis based Center for Energy and Environment, which will analyze the data collected from each home.

But Gordon said there’s a need for data to validate some of those claims. "Up till now, a lot of the talk has just been a lot of claims that haven't really been backed up by a whole lot of data,” he said. “So I think this is going to, for good or for worse, provide some some answers to questions that I've heard pretty often about this material. So I think it's a very important study, and timely."

The cost of construction is about 25 percent higher for the hemp house. That’s partly because raw materials are still hard to find and expensive. But Justin Berg also believes this research will show hemp construction can save money long term. “Paying more upfront and getting those savings over time by energy usage, you know, having a biodegradable structure. You start measuring out the materials and its impact and I think that's where we're hoping to help shine a light on it,” said Berg.

To purchase raw material that met their standards for consistency, Berg said they had to buy the hurd in 400 pound bags from a company in Kansas and ship it to Fargo. There are at least two new hemp processors starting in Minnesota, and Berg is building a processing facility in Wahpeton that he plans to have operational later this year, but he expects it will take months to fine tune the processing to turn out a high quality product.

Berg says there's still a steep learning curve, from farmers who grow the crop to processors turning out raw materials, but he's willing to invest in the belief that hemp will become a sustainable construction alternative. "It's definitely the early days, and I think in 10 years, you'll see an industry that has a real impact," he said. The region will need more hemp processing capacity to bring raw material prices down, and farmers need to be convinced hemp is a viable alternative crop, said Berg.

He would like to see the federal government do more to encourage hemp production as an alternative crop that could also help combat climate change by storing climate warming carbon. "You look at something that's going to help sequester carbon in the soil with a deep taproot crop as well as being put into materials that are stored for 100 plus years and continue to sequester carbon," said Berg.

But ultimately, farmers will need a consistent market for the crop, and the construction industry will need to accept hemp as a viable alternative material. Berg hopes this research project on a tiny plot of land in Fargo, will help convince more builders and consumers to give hemp a try.