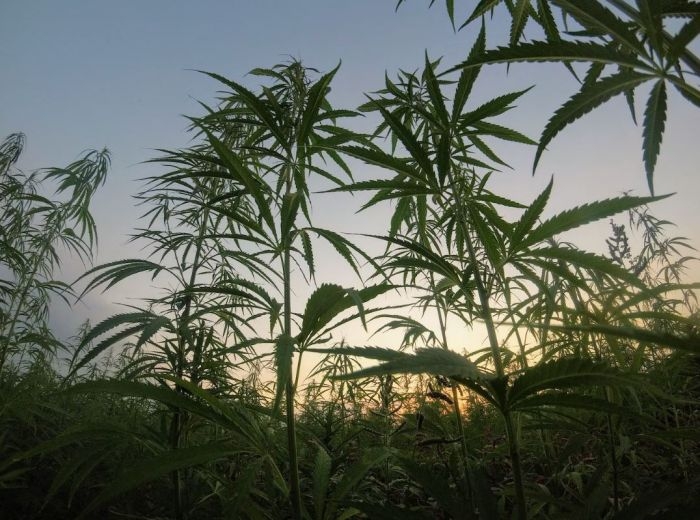 Satellite images showed greenhouses on Graham’s property in the Emerald Triangle, a region known for cannabis cultivation, and the Humboldt County Planning and Building Department just assumed he was growing marijuana without paying the county its cut. Based on nothing else, the government declared Graham guilty of cultivating cannabis without a permit—a civil offense in a state with legalized marijuana.

Code enforcers obtained no search warrant and made no site visit. They jumped straight to the penalty phase with an abatement order that gave Graham 10 days to tear down the greenhouses and fill in a nearby rainwater-catchment pond.

Graham asked for a hearing on the charges, but the county ignored the request and started assessing $10,000 fines per day until the tab reached $900,000.

To turn up the pressure even more, the county published its untrue charges in the local newspaper, smearing Graham just weeks after he opened his restaurant.

He was shell-shocked, but he had a strong defense: innocence.

Graham did not have cannabis in his greenhouses, which code enforcers would have seen if they had looked inside. Rather, he was growing vegetables for his restaurant, and the pond is for wildfire control. As a captain and former chief of the Whale Gulch Volunteer Fire Company, he uses part of his land for public service.

A judge might have listened, but Graham never made it that far. After waiting more than four years for a hearing, he finally received permission to appear before a private attorney on the county’s payroll—not a real judge. Unfortunately, the appointment came with a threat.

Rather than risk financial ruin in a rigged system, Graham took the offer. But he did not give up his fight. On Oct. 5, 2022, he joined other Humboldt County landowners in a class-action lawsuit to end the abuse. The public-interest law firm we work for, the Institute for Justice, represents them.

The case highlights a nationwide risk for property owners as the War on Drugs transitions to a new phase, with marijuana now legal in many states and recent White House pardons at the federal level.

Officers confiscate more than drugs when they conduct searches. They’ve seized more than $68.8 billion in cash during the 20-year span from 2000 to 2019. Many jurisdictions allow law enforcement agencies to keep up to 100 percent of the proceeds for themselves.

Why the Hell Isn’t Biden Ending the Federal War on Cannabis?

The perverse incentive invites factory-like efficiency in law enforcement. Police and prosecutors cut corners to maximize profit—often with the help of compliant lawmakers and judges who assist the abuse rather than check it.

As a result, the War on Drugs remains a War on Due Process.

They conduct warrantless surveillance, make pretextual traffic stops, bend the definition of “probable cause” to fit any situation, and forfeit assets without arresting or charging anyone with wrongdoing—often without finding narcotics. Then, prosecutors force property owners to prove their innocence, flipping upside down the standard that we are supposed to be presumed innocent until proven guilty.

Legalizing marijuana has not fixed these problems. Drug enforcement has been big business for too long, and agencies have grown dependent on the revenue. They are not about to let it go. They are simply changing tactics instead.

Humboldt County serves as a model for the latest iteration of the War on Due Process. The California State Association of Counties even gave an award for the county’s quick pivot after voters legalized recreational marijuana in 2016. By the time legalization took effect in 2018, code enforcers were ready.

Their business model is simple: They charge a premium for cannabis land use and turbocharge penalties for anything that might constitute evasion. Simply owning a greenhouse or graded patch of land without a permit is enough to trigger unfounded and uninvestigated declarations of guilt.

When code officials do show up, they come with officers in tactical gear and long rifles. Inspectors also patrol permitted farms in military helicopters. Massive penalties for minor violations force many landowners to settle baseless charges.

County resident Rhonda Olson got hit with more than $7 million in fines, and Corrine and Doug Thomas faced more than $1 million in fines—despite never cultivating cannabis—simply because prior owners had grown the crop without a permit. The county also ordered them to destroy any structures or grading that the prior owners might have used for cannabis.

Law enforcement agencies in Kansas and Southern California laid in wait for armored vehicles carrying cash from state-legal cannabis businesses. Overall, the agencies seized and attempted to forfeit more than $1 million in 2021 and early 2022.

Even when agencies use civil and administrative rules to police legalized marijuana, they still treat growers like dangerous criminals. Dozens of officers in tactical gear raided the business of a longtime medical caregiver in Michigan and burned his plants in October 2022 because he cultivated medicinal hemp and CBD without a license. The government even initiated forfeiture proceedings to take the man’s tractor.

Graham got the reverse treatment in California: a demand letter with no police presence. Either way, the War on Due Process continues. Police and prosecutors are too invested to make meaningful reform, so lawmakers and judges must step up.

A good starting point would be to stop persecuting restaurant owners for growing vegetables.