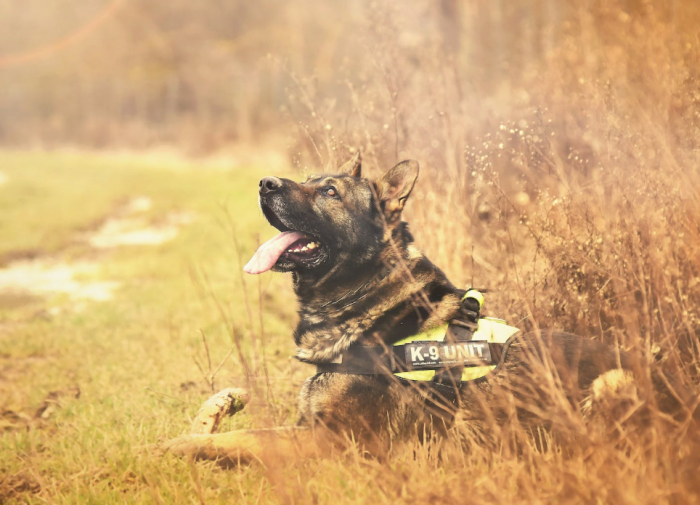 With legalization of marijuana on the ballot in November, some in Frederick County law enforcement might see changes in their job descriptions — narcotics K-9s.

K-9s can be trained in different skills, such as tracking people, identifying guns and physical apprehension. Narcotics K-9s are trained in identifying various substances such as heroin, fentanyl and marijuana.

A possible change in the state constitution through a referendum would legalize the use of marijuana for any individual who is at least 21. If passed, it would take effect July 1, 2023.

Agencies like the Frederick County Sheriff’s Office stopped training their dogs in identifying marijuana in 2014, when possession of less than 10 grams was decriminalized, said Capt. Jeff Eyler, the agency’s patrol operations commander.

The agency saw that Maryland could potentially make marijuana fully legal in the coming years, so it proactively stopped marijuana training, he said.

The sheriff’s office had concerns about probable cause on searches, he said.

Once a K-9 has been trained in detecting an odor, it can’t be untrained, he said. If a dog is trained in identifying marijuana and other drugs, there’s no way to distinguish which drug it is giving an alert for, Eyler said.

“I would not feel comfortable sitting on a stand saying, ’This dog was trained on marijuana, but we’ve taken that out,’” he said.

Unlike humans, dogs can smell every individual scent in something, Eyler said. When people smell beef stew, dogs smell the meat, the carrots, the celery and the spices.

One of the five dogs is trained in detecting marijuana, Eyler said. When the sheriff’s office got the dog, it had already started marijuana identification training, so the agency let the dog continue.

If the referendum passes, he said, the K-9 that can detect marijuana could still be used in schools or the Frederick County Adult Detention Center, where marijuana is not allowed, Eyler said.

All of the Frederick Police Department’s drug-identifying K-9s are trained in marijuana, said Cpl. Shannon Stream, the agency’s K-9 supervisor.

The department has nine dogs, eight of which are K-9s used for detection, Stream said. In that K-9 corps, there’s one bloodhound trained to track people, one gun detection dog and six patrol dogs, which are trained in more than one skill.

Of the six patrol dogs, five are trained in narcotics and the other one is trained in explosives.

This will give the department time, if the referendum passes, to get new dogs and train them. It would make for an easy transition with the new dogs starting on narcotics, and the previous narcotic dogs becoming more specialized in their other skills, since they are dual trained.

“We would still use them in a patrol capacity for tracking and area searches, building searches, apprehension, all that type of stuff,” Genovese said.

The Brunswick Police Department kept the marijuana question in mind when it got a K-9 in 2019.

Officer Brandon Smith, who is K-9 Kyro’s handler at the police department, wrote in an email Wednesday that when Kyro joined the force, the department decided not to train him on marijuana.

Kyro, the only K-9 at the agency, is trained in narcotics and searching for clothing and other items, Smith wrote.

“Due to the time and money invested in these animals, we did not want years down the road to need to replace a dog before its working span was over,” Smith wrote.