Kamala Harris: ‘nobody should have to go to jail for smoking weed’ 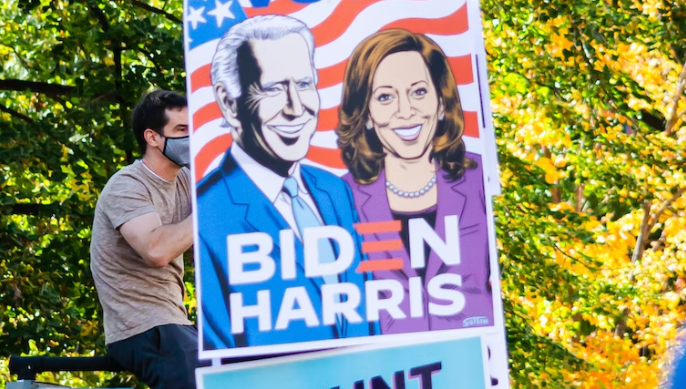 Harris’ comments, made during an interview on “Late Night with Seth Meyers,” came less than a week after President Joe Biden issued pardons to individuals who have previously been convicted of a cannabis-related offense under federal law.

“Let me just start with saying this. I strongly believe, and the majority of Americans agree, nobody should have to go to jail for smoking weed, right?” Harris said, as quoted by Yahoo. “We’re urging governors and states to take our lead and to pardon people who have been criminalized for possession of marijuana. And ultimately though, as with so many issues, if Congress acts, then there is a uniform approach to this and so many other issues. But Congress needs to act.”

On Thursday, Biden announced that he will issue pardons to all individuals with federal convictions of simple marijuana possession, a move that will affect thousands of Americans.

In the announcement, Biden made the same points that his vice president deployed in her late night interview, urging “all Governors to do the same with regard to state offenses.”

“As I often said during my campaign for President, no one should be in jail just for using or possessing marijuana,” Biden said. “Sending people to prison for possessing marijuana has upended too many lives and incarcerated people for conduct that many states no longer prohibit. Criminal records for marijuana possession have also imposed needless barriers to employment, housing, and educational opportunities. And while white and Black and brown people use marijuana at similar rates, Black and brown people have been arrested, prosecuted, and convicted at disproportionate rates.”

Beyond the mass pardons, Biden’s announcement also marked the start of what could be a historic shift in U.S. drug policy, saying that he had directed “the Secretary of Health and Human Services and the Attorney General to initiate the administrative process to review expeditiously how marijuana is scheduled under federal law.”

“Federal law currently classifies marijuana in Schedule I of the Controlled Substances Act, the classification meant for the most dangerous substances.  This is the same schedule as for heroin and LSD, and even higher than the classification of fentanyl and methamphetamine – the drugs that are driving our overdose epidemic,” Biden said.

Nineteen states have legalized recreational cannabis for adults. Voters in five other states are set to vote on their own legalization proposals in next month’s election.

But Congress, despite being under Democratic control, has failed to approve its own cannabis reform measure.

In April, the U.S. House of Representatives passed a bill known as the Marijuana Opportunity, Reinvestment, and Expungement (MORE) Act, which would deschedule cannabis from the Controlled Substances Act.

Democrats in the Senate said they intended to craft their own legalization measure, but the effort stalled over the summer months.

Harris expressed support for marijuana legalization as a presidential candidate in the 2020 election, although her record as a prosecutor in California has left drug reform advocates cold.

During her time as San Francisco’s district attorney from 2004-2010, Harris “oversaw more than 1,900 marijuana convictions,” according to the Mercury News, which noted that her “prosecutors appear to have convicted people on marijuana charges at a higher rate than under her predecessor, based on data about marijuana arrests in the city.”

“Over Harris’ seven years as top prosecutor, her attorneys won 1,956 misdemeanor and felony convictions for marijuana possession, cultivation, or sale, according to data from the DA’s office,” the Mercury News reported. “That includes people who were convicted of marijuana offenses and more serious crimes at the same time.”