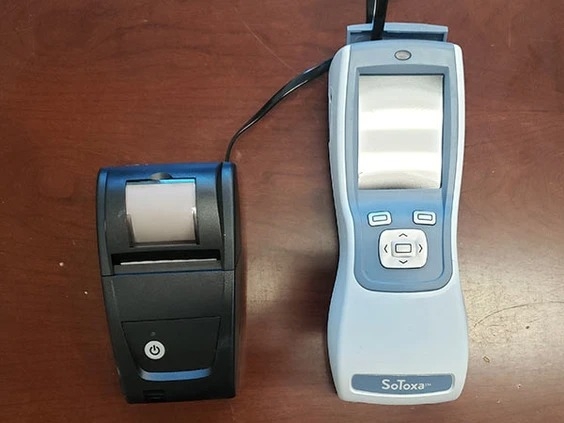 Results in as little as 15 minutes.

Officers with the Northwest Territories RCMP have a new tool to determine if drivers are over the legal limit for cannabis.

The police service has now deployed the new roadside screening devices for THC across the territory, the NWT RCMP notes in a July 26 statement.

Conducted similarly to roadside alcohol tests, the RCMP reports the devices are used to take an oral fluid sample and can be completed in about 15 minutes. The sample will show whether or not the driver in question is over the legal limit.

The federal government notes that testing at or over two nanograms (ng), but under 5 ng, of THC per milliliter (ml) of blood, is a straight summary conviction offence punishable by a maximum fine of $1,000.

“In the NWT, there is zero tolerance for alcohol and drugs for drivers 21 and under, novice drivers and some commercial vehicle drivers,” according to the Northwest Territories Liquor and Cannabis Commission.

Screening in the NWT will not solely revolve around cars and trucks. It’s a criminal offence to operate a motor vehicle, boat, snowmobile, all-terrain vehicle or other motorized conveyance while under the influence of THC over the limit.

“Impaired operation of motor vehicles by alcohol and drugs remains an issue within the territory,” the statement notes, adding that impaired driving is not only dangerous, but “entirely preventable.”

“THC increases your chances of getting into a collision. This risk increases significantly when cannabis is combined with alcohol,” the statement adds.

In May of 2021, Newfoundland and Labrador’s RCMP was set to start using portable roadside drug-screening devices. The plan was to roll out 21 new devices, which register as a pass or fail, for use in various areas throughout the province, the RCMP noted at the time.

Later that month in the province, the RCMP announced that two men were arrested on May 22 — which happened to be National Impaired Driving Enforcement Day — for drug-impaired driving after testing positive on the new screening equipment for active THC.

The debate between THC detection and impairment has long raged. Professor Iain McGregor, academic director of the Lambert Initiative for Cannabinoid Therapeutics in Australia, supports adopting an evidence-based approach.

“Our legal frameworks probably need to catch up,” McGregor argues, adding that “prosecution solely on the basis of the presence of THC in blood or saliva is manifestly unjust.”

A U.S. study released in 2022 found that regular cannabis smokers taking part in simulated driving testing saw reduced skills behind the wheel, but “indistinguishable” performance at 4.5 hours compared to those taking a placebo.

Investigators in another study from 2021 did not see more driving impairment in occasional cannabis users compared to daily users.

But it’s also necessary to consider the influences that put a cannabis-consuming driver behind the wheel in the first place.