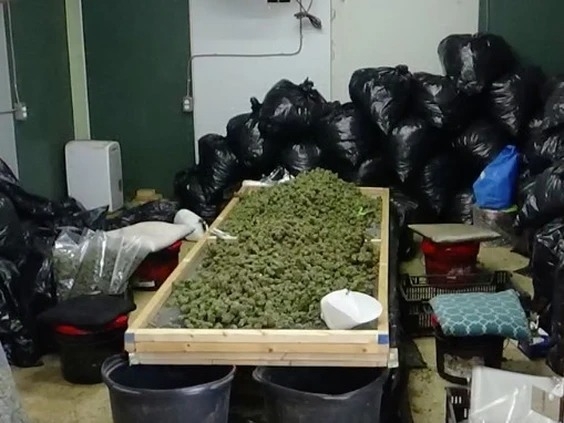 Announced on July 7, the OPP reports the large-scale cannabis processing and production facilities raided on June 28 near Kingsville, Ont. contained thousands of cannabis plants and piles of bags filled with dried flower, per the Windsor Star.

Members of PJFCET, a team created to enforce cannabis laws by dismantling organized crime and illegal cannabis trafficking, also confiscated equipment and property linked to the illegal operation believed to be worth more than $300,000.

A short video of images posted by the OPP on both Facebook and Twitter shows the outside of the greenhouses, what looks to be hundreds or thousands of plants flanking a concrete walkway on the inside of a greenhouse, an open tabletop of thousands of cannabis buds surrounded by plastic bags of suspected weed, open, wooden shelving units that look to be housing seedlings or saplings, row upon row of garbage bags and bags and a bin on the floor surrounded by stray cannabis.

Charges have not yet been laid and the OPP’s investigation is continuing.

In a Facebook post, the OPP Commissioner Thomas Carrique thanked partners for the assistance over the course of the investigation, including the OPP West Region Emergency Response Team and Community Street Crime Unit, the Provincial Asset Forfeiture Unit, Canada Border Services Agency and the Windsor Police Service.

For personal use, adults can grow from licensed seed or seedlings up to four cannabis plants per residence; commercial operators require a Health Canada-approved nursery, standard or micro-processing cultivation licence to produce, distribute or sell cannabis.

As it stands, the federal government notes there are 875 authorized licensed cultivators, processors and sellers under the Cannabis Act.

Per the Cannabis Act, the maximum penalty for producing large amounts of weed beyond personal cultivation limits is up to 14 years in jail.

The OPP has had a hand in several large busts in recent years. Just this past May, three people were charged after the OPP and its partners discovered a massive cannabis grow containing more than 7,600 plants in Renfrew, Ont.

Additionally, thousands of plants were found near Leamington this past March and about 4,000 plants were seized from a Kingsville greenhouse in November 2021.