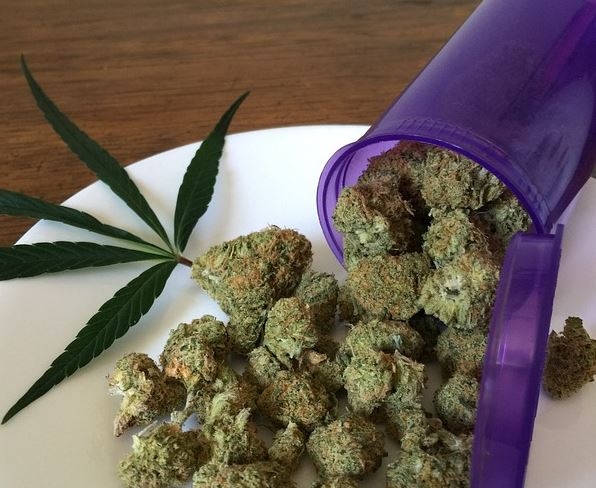 The company connected her to Theodore Colterelli, a Pennsylvania doctor who had the power to decide whether patients qualify for the state’s medical marijuana program.

After a virtual appointment, Colterelli approved her. But the evaluation gave her serious pause about the process. Grey told Spotlight PA she could barely see Colterelli during the video appointment, and the conversation felt short. She also didn’t know where to upload her medical records in Veriheal’s system, she said.

“Is he giving out legitimate approvals?” she recalled thinking.

Grey filed a complaint against Colterelli with the Department of Health, which oversees the state’s medical marijuana program. The department later accused him of violating state regulations by approving Grey’s certification without reviewing her medical records. But more than a year after the department began its disciplinary case against Colterelli in April 2021, the process was still not finalized in early November.

Colterelli’s attorney, Richard Hark, told Spotlight PA the doctor complied with all aspects of the medical marijuana law with every patient he consulted, and he noted that the department did not allege Colterelli violated state rules with any other patients. In legal filings, Hark claimed Grey’s complaint was “motivated by a misguided sense of public duty,” insisted the doctor properly issued her a certification, and called the department’s actions against Colterelli “a flagrant abuse” of its power.

Indeed, Colterelli’s case is unique. He is the first physician to face formal discipline from the Pennsylvania Department of Health for allegedly violating the rules of the state’s medical marijuana program since it was created in 2016, public records show. There are over 417,000 active patients, and more than 1,800 approved medical marijuana physicians.

Despite concerns among some medical professionals that almost anyone could get approved to use medical marijuana, the health department rarely takes disciplinary action against doctors for potential program violations. While public records show the department has warned a handful of physicians for allegedly violating program rules, as of early July, there were no other disciplinary cases similar to the one against Colterelli. Also, state regulators have unevenly enforced other program rules, such as advertising restrictions, according to a previous Spotlight PA investigation.

In Pennsylvania, medical marijuana cards are a multimillion dollar business. Each year, hundreds of thousands of patients must receive approval from a physician if they want to legally use cannabis in the state. Certification often costs about $100 to $200, and in order to issue one, doctors must hold a valid medical license, complete a four-hour training course, and receive approval from the health department.

Some medical cannabis supporters, like Pennsylvania pharmacist Lauren Vrabel, have raised concerns about the health department’s oversight of the certification process.

“Certifying physicians should be audited for maintaining patient records including proof that prior diagnosis has taken place before the certification appointment,” Vrabel said in written testimony to lawmakers earlier this year. “They should also provide proof that appropriate counseling has occurred per the rules and regulations.”

Other supporters of medical marijuana have publicly questioned the practices of third-party medical marijuana companies, including Veriheal. These businesses help patients schedule appointments with doctors who can conduct an evaluation, the key step to obtaining a medical marijuana card in Pennsylvania. Their profits are often based on approvals: Veriheal’s website for Pennsylvania promises patients will “get approved or your money back!”

Veriheal has also been accused of paying a fee to doctors only if they approve patients.

The Pennsylvania Department of Health has repeatedly said it does not have oversight of these businesses. Spokesperson Maggi Barton told Spotlight PA that “patients’ health and safety is a top priority.” She would not comment on the Colterelli case and provided few details in response to broader questions about how the department ensures physicians are following the rules.

Veriheal spokesperson Anthony Dutcher told Spotlight PA the company “does not control the professional conduct of physicians,” does not perform medical services, and does not keep complete patient records.

“Veriheal takes regulatory compliance very seriously and considers compliance to be a constant ongoing effort to maintain vigilance and to always improve,” Dutcher said in an email.

Under Pennsylvania law, medical marijuana physicians must complete a full assessment of the patient’s medical history and current medical condition in order to issue a certification.

“I’m a little bit of a broken record, because I said it last time and I’m going to say it again, because I wanted to emphasize that point,” former health secretary Rachel Levine said at a November 2019 meeting of the Medical Marijuana Advisory Board. “We expect a thorough history, physical examination, review of records … an appropriate and thorough consultation from our physicians as they see patients.”

Before the coronavirus pandemic, the law required physicians to see patients in-person, but regulators and lawmakers loosened the rules to allow for remote visits. But while the state has made the certification process easier, the Department of Health has also fought to prevent the public from knowing how many patients each doctor approves — data that could identify outliers who might be bending or breaking the program’s rules.

The department sued a reporter after the state’s Office of Open Records ruled that data for each physician should be made public. The department argued the state’s medical marijuana law has broad confidentiality rules that prevent the information’s release, and the case was pending in Commonwealth Court as of early November.

It’s unclear how many people Colterelli approved under Pennsylvania’s program. An attorney for the department raised the question during his disciplinary hearing, but the examiner overseeing the proceeding ruled he didn’t need to answer.

‘This isn’t a frivolous process’

Grey, 62, has more experience with medical care than most. She’s a licensed respiratory therapist, the founder of a free medical clinic in Columbia County, and a member of the State Board of Osteopathic Medicine. She told Spotlight PA that when she signed up for the medical marijuana appointment through Veriheal last year, she was looking for help — not problems. But her professional background motivated her to follow through on the complaint.

“I took an oath to protect the citizens of the commonwealth as patients,” Grey said. “And here I am as a patient not really liking or not really understanding how this whole medical marijuana process should work.”

While Grey told Spotlight PA she had several concerns about her appointment with Colterelli, the department’s formal allegations were focused on access to Grey’s medical records.

The department alleged Colterelli violated the program’s regulations, which require physicians to review a “patient’s prior medical history as documented in the patient’s health care records if the records are available for review.”

During a hearing, Colterelli’s attorney and Grey clashed over whether the process for uploading medical records was clear for patients. Colterelli testified that uploading documents is easy and he was “baffled that she couldn’t do it.”

Colterelli insisted he provided a thorough review and determined Grey was an ideal medical marijuana patient. Many times, he said, patients show up to in-person appointments without their records and he has to diagnose them, too. The process involves asking about their symptoms, problems, what affects them, and what tests they’ve undergone.

“You’re very thorough with them. You also make a judgment of their character, their integrity, how they answer you, you know,” Colterelli testified. “This isn’t a frivolous process.”

He was able to do that in his time with Grey, he testified.

Exactly how long her appointment lasted isn’t clear from the case file. Colterelli described a roughly 10 to 15 minute visit.

Grey’s concern about barely being able to see Colterelli wasn’t part of the department’s argument for punishing the doctor. State law does not require video for remote consultations — several experts say they can be audio-only.

After the hearing, an attorney for the Department of Health recommended removing Colterelli from the program. The alleged “major violation” directly impacts the safety of every patient he encounters, the attorney said.

Colterelli’s attorney argued the case should be dismissed. He claimed Grey’s medical records were not readily available and the doctor properly issued the certification. Hark wrote that Colterelli thoroughly interviewed her and she provided “a complex, internally consistent, credible, and extensive medical history.” He noted that Grey testified that she was honest during her appointment with Colterelli.

In March, hearing examiner Debra Sue Rand ruled Colterelli violated the state’s rules, and recommended suspending his ability to issue medical marijuana certifications for three months. Rand wrote that when Grey offered to share her computer screen to show her medical records during their video consultation, he declined.

Doctors are required to check medical records so they can be certain patients aren’t taking other medications or suffering from other conditions that would make using marijuana inadvisable, Rand wrote.

Still, Rand noted that the department didn’t allege that he routinely did not check patient health records and it did not dispute that a certification was proper for someone with Grey’s medical condition.

A senior Department of Health official accepted the hearing examiner’s recommendation in an Oct. 21 final order, but Colterelli still had the option to appeal. His attorney declined to comment on the decision. A spokesperson for Veriheal said the company hasn’t had any relationship with Colterelli since February 2022.

In the Colterelli case, the Department of Health did not allege any wrongdoing by Veriheal.

The company’s website says its goal is to “make the experience of getting a medical marijuana card as easy as possible.” It lists the standard price of an annual certification as $199.

Earlier this year, a Florida physician and his attorney raised public questions about the company’s practices.

Jack Rothman told the Florida Board of Medicine that Veriheal offered him this deal: The company would refer patients to him and pay him $55 for every one he approved. But if Rothman determined the patient didn’t qualify, he would be paid nothing.

In its statement to Spotlight PA, Veriheal did not specifically address Rothman’s claims. The spokesperson said the company “does not share in the professional fees of physicians” but did not elaborate.

Rothman is an independent contractor for another medical marijuana company, DocMJ, according to company CEO Aaron Bloom, the attorney who represented Rothman in his petition to the Florida Board of Medicine. The company is based in Florida and also offers telemedicine appointments in Ohio and Texas.

Bloom told Spotlight PA that paying doctors a fee only if they approve patients creates a financial incentive for them to do so.

Veriheal and Bloom’s company both offer money-back guarantees to patients if they aren’t approved. But Bloom said he pays his doctors based on an hourly rate regardless of how many patients they see or the outcome of the evaluation.

Pennsylvania physician MaryFrances Koester raised similar concerns to the Department of Health last year when she described the pressure doctors face when third-party certification companies pay them only if they approve patients. Koester named Veriheal in her public comment and she later told Spotlight PA she had worked with the company and left after she had concerns with its practices.

“I don’t blame Veriheal for what they do,” Koester told Spotlight PA. “I blame the state for not regulating it.”

In June, the department responded to concerns about physicians receiving payment only if they approve patients. But it deflected responsibility, saying the commentator “should raise this concern with the proper authority.” The department’s response — which it provided as part of a formal process for adopting regulations for the medical marijuana program — did not say who, if anyone, that should be.

In Colterelli’s case, the hearing examiner noted that there was no evidence the doctor “gained financially other than perhaps to obtain his regular fee.”

Colterelli’s attorney, Hark, told Spotlight PA that financial compensation wasn’t an issue for the doctor. It “never entered into the nature and manner of the medical opinions, diagnosis, and prescriptions he issued,” Hark said.

“The state has to have some onus in this, as well,” she said. “… How is the state vetting these companies?”