Posted September 27, 2022 on Inside Climate News 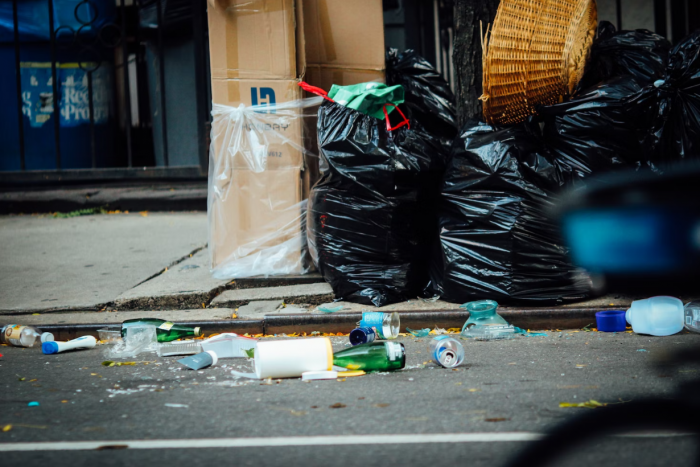 “We're going to have this entire new universe of plastic waste of the worst kind,” says one environmental activist.

Pre-rolled marijuana cigarettes in sativa, indica and hybrid varieties are seen for sale at a dispensary in California on Jan. 1, 2018. Credit: Robyn Beck/AFP via Getty Images

Waste packaging from a burgeoning and newly legalized marijuana industry litters streets across the country, adding to a global crisis of plastic waste.

In New York, regulators who are making the state’s first-ever rules for the retail sale of recreational marijuana hope they have answers to limit their state’s contribution to the problem. They’ve been working to include sustainable packaging requirements into the licenses that businesses will need to open by the end of this year.

However, at least one prominent environmental advocate fears New York—and other states grappling with a new and booming industry—aren’t requiring enough producer responsibility for the environmental impacts of their products.

Judith Enck, president of Beyond Plastics, a group working to end plastics waste, said the best time for a nascent industry to bake in sustainability principles is when it’s just getting established—and for legalized cannabis sales, she added, that means now.

ICN provides award-winning climate coverage free of charge and advertising. We rely on donations from readers like you to keep going.

“When states approve recreational use of marijuana, they should create environmental standards for packaging, otherwise, we’re going to have this entire new universe of plastic waste of the worst kind,” said Enck, a former regional administrator of the U.S. Environmental Protection Agency.

“It’s small, it’ll get littered on city streets, and very likely get washed into storm drains, and then into streams in the ocean,” said Enck, who got her start in environmental advocacy successfully lobbying for New York’s state’s 1982 Returnable Container Act, known as the bottle bill. “There are alternatives to plastics, but the companies selling the product will probably just go for the cheapest packaging they can find, which is plastic.”

Marijuana in medical dispensaries or retail stores is sold in many forms, including cigarettes, oils, resins or as edible products like brownies, cookies or gummies. And plastic litter in the form of “doob tubes,” Mylar or other plastic sachets or pouches and spent cannabis oil vape cartridges made of plastic are already getting kicked to the curb in cities where marijuana sales are legal, environmental advocates and industry insiders said. It’s happening even in New York City, from already existing illegal retail outlets that follow no rules.

An industry-wide discussion on pot and plastic is happening at a pivotal time. Earlier this year, 175 countries including the United States coalesced  around an urgent need and began working toward a global United Nations treaty to curtail plastic waste. U.N. officials have described the global plastics problem as part of a “triple planetary crisis of climate change, nature loss and pollution.”

The cannabis industry itself recognizes the problem, said Derek Thomas, a former marketing and advertising committee member of the National Cannabis Industry Association, and the chief growth officer of a company, AE Global, that sells packaging to the cannabis industry.

“We work with a number of the largest, medium and smaller-sized growers and brands … around the country, and what is encouraging is the vast majority of them identify the huge waste issue within the cannabis industry,” Thomas said. “Everybody is looking for solutions that not only make us and the consumer feel better, but also have impact and integrity behind them.”

When the New York legislature legalized adult-use cannabis for recreational purposes last year, it became the 19th state to do so in the last decade, according to the National Conference of State Legislatures; 37 have legalized cannabis for medical use. Voters in at least five states—Arkansas, Maryland, Missouri, North Dakota and South Dakota—will find cannabis legalization measures on their Nov. 8 election day ballots.

And while new Gallup polling finds that Americans are evenly divided on marijuana’s effect on society—49 percent say positive, 50 percent negative—a lot of Americans are using cannabis. Overall, 16 percent of adults, and as many as 30 percent of young adults, ages 18-34, say they smoke marijuana, according to Gallup. For edible pot products, the numbers are 14 percent for adults and 22 percent for young adults.

New Frontier Data, a business group that tracks the cannabis industry, projects that sales will double from $32 billion this year to $58 billion-$72 billion by 2030, depending on how many additional states legalize the product.

In New York, the recreational legalization law went into effect on March 31, 2021, and since then, a new state agency, the Office of Cannabis Management (OCM), governed by a Cannabis Control Board, has been working to put in place comprehensive regulations for adult-use, medical and hemp cannabis. The office is charged with issuing licenses and rules for how and when businesses can participate in the new industry. Environmental sustainability such as retail packaging is one of the issues the office is working on, said Lyla Hunt, the deputy director of public health and campaigns for the OCM.

“We did not go first, so we have been able to study and review regulations in other states with adult-use markets,” Hunt said. As a result, she said, New York has drafted retail rules that she believes are among the most robust in the nation.

Under New York’s proposed regulations, marijuana outlets will have up to two years to submit an environmental sustainability program for cannabis product packaging. Those plans may include strategies such as re-using sanitized containers, using non-plastic packaging, or using plastic packaging made with at least 25 percent post-consumer recycled content.

“We are balancing all the goals,” Hunt said, adding that the packaging will still need to include required safety and consumer labeling while “not being attractive to individuals under 21.” It must also be designed to resist opening by children, she said. Those goals include protecting the public while having “the smallest environmental footprint possible,” she added.

The proposed regulations were open for public comment earlier this summer and the agency is now reviewing the comments it received and expects to issue its first licenses for retail outlets by the end of this year, she said.

Enck said she had worked to get state lawmakers to put more environmentally friendly language into New York’s legalization bill, but lawmakers instead largely deferred to regulators, who, she said, should consider a bolder approach than they have.

“What I have been telling them is recycled content (in plastic packaging) doesn’t really help,” Enck said. “When plastics get littered, the ocean doesn’t care if it’s a recycled content container or a virgin plastic container. What they really need to focus on is reusable packaging.”

Her suggestion is that reusable packaging should be made from durable material that is not plastic and can be reused at least 50 times. It could include packaging from metal, paper, cardboard, wood, glass or other materials not made from fossil fuels. In addition, she recommends the packaging include at least a $1 deposit.

Brittany Carbone, the chairwoman of the sustainability committee for the Cannabis Association of New York (CANY), said she understands the problem, including how only a small amount of plastic is recycled, the oceans are filling with plastics and microplastics are ubiquitous. She gives New York credit for working toward a solution.

“It’s an issue with many consumer products,” said Carbone, who grows hemp and now marijuana at Tricolla Farms in upstate New York. “Although we’re not necessarily creating more plastic waste than any other business, we have a unique opportunity to address it.”

“It gives the supply chain some breathing room,” she said. “ We don’t want further delays getting to market and it gives us time to get to more sustainable options in the future.”

Requiring recycled content in plastic containers or banning single-use plastics are good goals, but so far, there aren’t many alternatives, or the alternatives are too expensive, she said.

Sustainability issues go beyond retail packaging and also need consideration, she and others in the industry said. Growers are required to tag and trace each plant, and so far, the only options are small plastic tags, Carbone said. “If somebody has 5,000 plants, or 10,000 plants, that is how many tags you get.”

Netting used by growers is made of plastic and sometimes mulch is, too, she said. “There are a lot of things behind the scenes that are primed to be addressed. We look at consumer packaging first because it’s littering the streets.”

California’s new Plastic Pollution Prevention and Packaging Producer Responsibility Act, signed into law on June 30, could force the industry to rethink packaging in that state. But just how much change the law could bring to the industry remains uncertain.

Other states with legalized marijuana are struggling with too much plastic packaging, and one reason is because state laws require more security than is needed for some retail products, said Amanda Reiman, chief knowledge officer with New Frontier Data.

Dan Gearino’s habit-forming weekly take on how to understand the energy transformation reshaping our world.

California’s Department of Cannabis Control, which regulates cannabis packaging, is working to determine how the law will affect its licensees that produce products sold in single-use packaging, an agency spokesperson said. There could be some exemptions for producers who meet certain provisions of that law as determined by another state agency, CalRecycles, the spokesperson said.

A CalRecycles spokesperson did not return requests for comment.

“California has a commitment to less plastic,” said Reiman. “How that will impact the cannabis industry remains to be seen.”

Moe said he expects the cannabis industry to seek some sort of medical exemption from a crackdown on single-use plastics in California.

In the meantime, many people think people selling marijuana legally are making a lot of money, but the profit margins are slim, Moe said.

“That’s pushing them to go to these plastic pouches,” he said. That includes the growing use of pouches made of Mylar, which experts say is a particularly difficult kind of plastic to recycle. “They are pennies compared to some of the other ways of putting your product into a packet.”

And they’re sent to the landfill or dropped to the ground, Moe added. “We see it here, too, and it drives us crazy.”