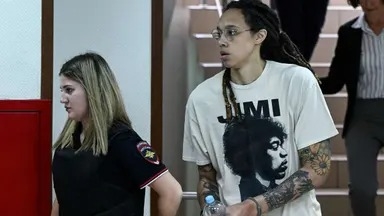 “I realize you are dealing with so much, but please don’t forget about me and the other American Detainees. Please do all you can to bring us home.”

Brittney Griner hand wrote a letter to President Biden, which was delivered to the White House on the 4th of July. The WNBA superstar told the president that she fears she’ll be detained in Russia indefinitely and pleaded for him not to forget about her and other Americans detained in Russian. (Benzinga)

Griner faces a 10-year sentence in a Russian penal colony if convicted of the alleged crime of having cannabis oil in her suitcase when she was detained in Moscow on February 17, a week before Russia invaded Ukraine.

Three excerpts of Griner’s letter to Biden were made public, while the rest is being kept private, according to a statement released by a communications company representing the Griner family and reported by CNN.

“(As) I sit here in a Russian prison, alone with my thoughts and without the protection of my wife, family, friends, Olympic jersey, or any accomplishments, I’m terrified I might be here forever,” wrote Griner.

“On the 4th of July, our family normally honors the service of those who fought for our freedom, including my father who is a Vietnam War Veteran. It hurts thinking about how I usually celebrate this day because freedom means something completely different to me this year.

“I realize you are dealing with so much, but please don’t forget about me and the other American Detainees. Please do all you can to bring us home. I voted for the first time in 2020 and I voted for you. I believe in you. I still have so much good to do with my freedom that you can help restore. I miss my wife! I miss my family! I miss my teammates! It kills me to know they are suffering so much right now. I am grateful for whatever you can do at this moment to get me home.”

Griner has been playing basketball in Russia for the past seven years during the WNBA off-season and is much beloved in the country.

Terri Jackson, executive director of the union representing WNBA players, implied to NPR several days ago that Russia is playing politics with Griner.

“They know who they have. She’s a hero in their country too. I mean, they love women’s basketball,” Jackson said.

“They take their championships very seriously. And let’s be clear: she’s given them more than a few.”

Griner’s trial began this past Friday and will continue on July 7.