While neighboring states open up to cannabis, Kentucky stays closed 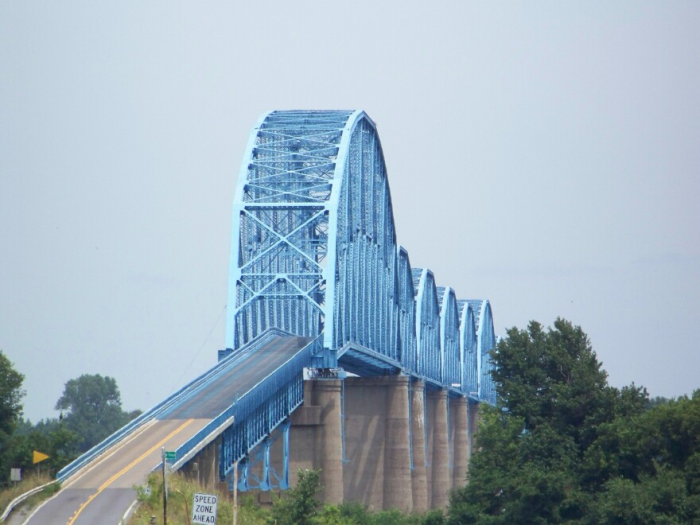 Tourists come from far and wide to see the 15-foot Superman standing with hands on hips in the center of Metropolis, Illinois. The 6,000 person-town got its name about a century before the Man of Steel was conceived, but still, the city holds a Superman Festival every year to capitalize on its namesake.

Now, a new attraction has cropped up in the Ohio River city after Illinois legalized medical and recreational cannabis in 2020. People from around the region regularly line up outside Metropolis’ one dispensary, but out-of-staters still risk criminal penalties if they use or possess the drug back home, whether they bought it legally, or not.

Kentucky is bordered by five states that have legalized marijuana in some form. But, it remains illegal in all forms in the Commonwealth. Illinois, on the other hand, has completely legalized marijuana, as has Virginia. Ohio and West Virginia have both legalized its medical use.

Many western Kentuckians make the short trip over a narrow blue steel bridge that connects the Bluegrass to Illinois to sample the product.

Lori Nichols owns Riverview Mansion, a bed and breakfast nestled in a 140-year-old house in Metropolis, where guests are welcome to treat the place like their own. She sees a lot of license plates from bordering states around town but especially at the dispensary. Nichols said having the dispensary in town has created some interesting requests for weddings as well. She says one group asked if they could be “420” friendly.

“It wasn’t like, ‘let’s have a party and get higher than a kite,’ It was, ‘this is our recreation.’ They didn’t drink, they had sweet tea and marijuana,” she said.

Back in Kentucky, marijuana is entirely illegal, even if someone is just driving through the state. Possession of the drug is a class B misdemeanor and carries a maximum of 45 days in jail. Trafficking is also a misdemeanor if it’s under eight ounces, but if it’s over that, it’s a felony.

Local law enforcement agencies recognize that popular attitudes over marijuana have changed in recent years, but still arrest people who use or possess the drug on the wrong side of the river, even if it was purchased legally.

Marshall County, Kentucky’s sheriff department regularly publishes arrests on their Facebook page. In a post from Dec. 28, 2021, the agency publicized an arrest that netted “several bags of marijuana having a total weight of approx. 13 grams, as well as, other items of paraphernalia and items which came from a marijuana dispensary in Metropolis, IL.”

In a post from Jan. 10 this year, the department admits there are “mixed emotions when it comes to marijuana for its use” but cautions citizens that the drug “is still illegal in the Commonwealth of Kentucky making it a crime to possess it here.”

Dave Bundrick, a lawyer with Edwards and Kautz in Paducah and former public defender says the dispensary is an easy 15-minute drive away. Kentuckians making that trip can still be pulled over for imbibing, but Bundrick said possession of marijuana has effectively been decriminalized, with most people being let off with a fine or a warning.

“You really don’t see people going to jail for possession of pot too much,” he said.

Bundrick said the court’s attitude towards marijuana cases in Kentucky has drastically changed over the years. He said it’s difficult to get convictions in those kinds of cases now because public opinion has changed.

“In this day and age, if you try a marijuana case, it’s hard to seat the jury because there are so many people they’ll say ‘I would never find anybody guilty,” Bundrick said.

“I definitely wouldn’t send anybody to jail.”

There are ripple effects to being arrested and charged with any kind of drug offense, even if it’s only a misdemeanor. Marcus Jackson is with the ACLU of Kentucky, he says going to jail is not the worst thing that can happen.

“While I was doing criminal expungement work, we had individuals that have possession of marijuana charges that were prevented from going to their children’s schools,” Jackson said.

Employers who do background checks will be able to see that a person was charged with possession and that could impact if they get that job or not. Having limits on where you can work makes it difficult to take care of your family or find the kind of housing needed.

Advocates point out marijuana isn’t just for recreational use; the drug has medical benefits that states like Kentucky still don’t officially recognize.

According to the Mayo Clinic, medical marijuana can help with conditions including severe chronic pain, nausea from cancer treatment, epilepsy, and more. Jackson suspects the legalization of marijuana, especially for medical reasons, has brought a lot of new people to Illinois.

“People from Kentucky actually moved to Metropolis because they have medical conditions that they need marijuana for,” Jackson said.

“And they’d rather not take that chance of coming back across that bridge and possibly facing criminal charges.”

Kentucky Gov. Andy Beshear, a Democrat, announced he is exploring options on legalizing medical marijuana by executive order, though it’s unclear if he has the power to do so.

The Republican-led state legislature has repeatedly declined to pass a bill legalizing marijuana in any way, though this year, lawmakers created a cannabis research center to further study the issue.

Beshear has also created a task force that will travel around the state seeking public comment on the issue.